Tàlaidhean Ùra was part of the Carers’ Music Fund, giving female carers across the UK opportunities for creative expression through music-making.

Tàlaidhean Ùra was part of the Carers’ Music Fund, a fund that spanned two years between 2019 and 2021 which gave female carers across the UK opportunities for creative expression through music-making.

Tàlaidhean was delivered by Feis Rois and worked with mothers of young children in rural areas of Inverness. Tàlaidhean, which translates as ‘lullaby’ recognises that isolation and loneliness can affect new mothers, and brings women together to learn skills and meet people who may be facing similar difficulties.

The project used traditional folk music from around the world to inspire the participants to create their own lullabies for their babies. The songs were recorded at the end of each cohort, and each participant took their unique lullaby away with them.

Tàlaidhean aimed to provide participants with a sense of achievement, through developing new skills and creating unique pieces of music.

To break down barriers to engagement, Feis Rois wanted to create a creche where the participants’ children could be looked after during sessions. They consulted with the women, who decided they would feel more at ease if the creche were in the room with them, staffed by a support worker. This way, they could involve the babies in sessions too.

Tàlaidhean are invested in the single-gender nature of the project, and hire professional female musicians to lead the sessions. 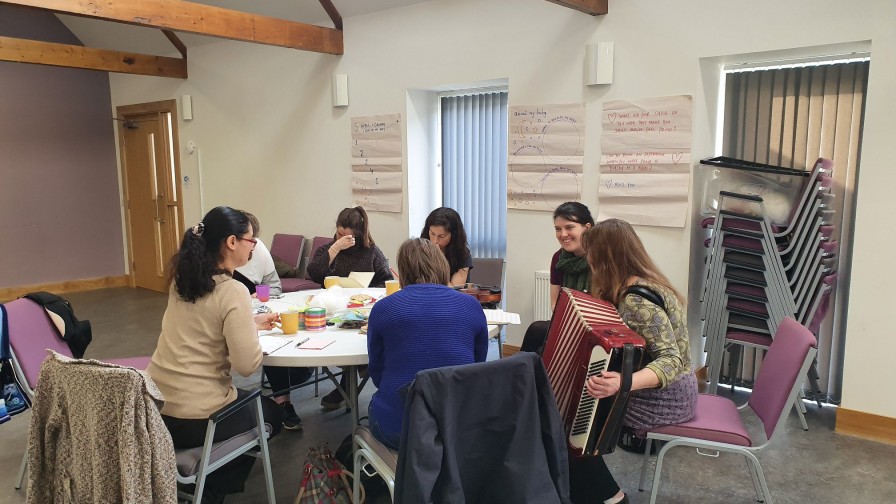 On June 23rd 2021, Spirit of 2012 hosted a virtual summit to share practical guidance on how to design and implement music programmes which improve wellbeing and reduce loneliness for unpaid female carers