With the Women's Euros kicking off tonight (6th July), Sunder Katwala says we must not miss the opportunity to create social connection.

British Future’s Spirit-funded project Shared Goals seeks to explore how football can encourage integration across divides and build shared place-based identities among fans. With the Women’s Euros kicking off tonight (6th July), Sunder Katwala says we must not miss the opportunity to create social connection.

When England and Austria meet with 70,000 supporters to kick off Euro 2022 at Old Trafford in Manchester on Wednesday, the occasion will project the ambition of the tournament to achieve a new status and profile for women’s football in this country. Many young supporters will be watching live international football for the first time. My ten-year-old, Indira, will be among them next week.

Having filled out each result on a wall-chart last summer, during the Euro 2021 men’s tournament (and even being taught the words of Three Lions by her 1990s nostalgic Dad), we will be at Brighton when England meet Norway next Monday to see how the Lionesses can contribute to the quest to bring football home.

The women’s Euros have an enhanced opportunity to provide the lasting memories of this sporting summer – alongside the Birmingham Commonwealth Games, which picks up the baton in late July – due to FIFA’s controversial decision to schedule the 2022 men’s World Cup just before Christmas in Qatar.  In British Future’s Jubilee Britain research, 53% of respondents (50% of men and 54% of women) felt that hosting the women’s Euros was important for the country, with a narrow gap to the 58% who said the same of the men’s World Cup, and the Commonwealth Games ahead on 64%.

Half a million tickets have already been sold for the 2022 Women’s Euros, demonstrating the growth of the women’s game. When the tournament was last hosted in England, in 2005, just 115,000 spectators attended across its 15 games. England’s matches broke records for women’s international football at the time: over 30,000 attended their opening game, with 3 million watching on the BBC.

But the tournament buzz in 2005 did not reach games where the hosts were not playing, except for the final: the elimination of the hosts in the first round reduced the tournament’s profile.  So Euro 2005 did not provide quite so dramatic a springboard as might have been hoped – but the interest in the England matches helped to build the case for the investment and sponsorship to develop a women’s professional league, which eventually happened in 2011.

Northern Ireland will also be among the 16 teams taking part in Euro 2022, in their first major women’s tournament. They will be the underdogs in games with Austria, Norway and England, but will expect to have strong support in Southampton from their ‘Green and White Army’ of supporters.

The fan culture at Northern Ireland games reflects a prominent, sustained and successful ‘Football for All’ campaign for inclusion, with an impressive level of supporter ownership of efforts to ensure a welcoming fan culture that invites support across communities, tackles sectarianism and ensures that families feel safe at games. Qualifying for Euro 2022 has boosted the profile of women’s football in Northern Ireland, with ambitions to increase female participation significantly over the next decade.

Sport is important to identity and belonging for several reasons. It is the first way that many of us experience national identity, hearing about or seeing a big match or tournament when we are of primary school age. Before we are teenagers and young adults, reflecting on how identity works, we will already have experiences of how these events are marked, who participated in them and whether they felt inclusive. A number of England’s Euro 2022 squad have spoken of seeing the Euro 2005 tournament as an inspiration for them to represent their country.

Sport in the United Kingdom can make a strong claim to have made a distinctive, more powerful contribution towards the creation of more inclusive identities – civic rather than ethnic – than any other sphere of public and cultural life.  That is demonstrated by both the diverse teams that represent us on the pitch, and gradually by more inclusion in the stands too.

The women’s game is much stronger than the men’s in its confidence about inclusion of players that are gay: a third of the England women’s squad are ‘out and proud’ while no England international or Premier League footballer has yet come out. 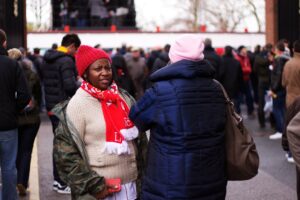 Hosting major tournaments has been especially important in national conversations about identity and belonging, as Euro ‘96 and the London 2012 Olympics demonstrated. Why does being the host seem to matter so much? There may be several reasons. The sense of a special and scarce occasion may generate a widely felt sense of ownership in the potential pride (or anxiety) about whether things will go well.

Hosting international guests requires us to decide, at home, what it is that we want to say about who we are and where we are going. When we are hosts, there are also extended opportunities to encourage new social connections between Brits from all walks of life – as people around the country come together to participate as competitors, volunteers and spectators. Research shows that meaningful social contact, such as through shared participation in sporting occasions, can help develop shared identities, shared norms of behaviour, trust, respect for difference, empathy and kindness.

Understanding what sport can do for social connection is the aim of the Shared Goals project, which British Future is embarking upon with the support of Spirit of 2012. The project will explore the potential reach of football and the contribution it can make to breaking down ‘them and us’ divides, projecting a ‘new us’ identity for towns and cities across Britain.

Turning moments into sustained movements depends on ensuring that showcase events like Euro 2022 are used as an opportunity to amplify and elevate the long-term work that helps football contribute to the meaningful contact and shared sense of belonging that can help to bridge social divides.

England’s women have gone out in the World Cup and European Championship semi-finals three times in a row since 2015. They will hope that home advantage can push them further this time. Spain are slight pre-tournament favourites over England, with France, the Netherlands, Germany and Sweden all seen as fairly evenly matched contenders. So results on the pitch will doubtless make a significant difference to how much impact this summer’s football tournament has on the national mood – but it is important not to leave football’s connection opportunity to sporting chance.